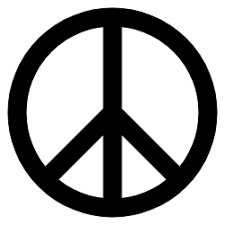 While this symbol was designed by Gerald Holtom in 1958 for the nuclear disarmament, in the years it had become more. It represent the will to resolve conflict with words and understanding, the will to be respectful of human and cultural diversity, the will to put the egoism/egotism/egocentrism aside.

Nowadays is so difficult to remember that sometime we just need to say NO to political/social abuse. We must be able to take position also if this means that we may risk something, that we may be in a less comfortable position.

Acts of violence are never the right answer, they never lead to positive results. It is bad thing when a single do any act of violence, but it becomes an horror when is a state doing it, and even worse, when it is justified with words as freedom and even worse peace.

What is going on in these days is terrible, the actions of terrorism that Mr. Trump is requesting and justifying are beyond any understanding (except political and economical interest).
Words like "we have targeted 52 Iranian sites (representing the 52 American hostages taken by Iran many years ago), some at a very high level & important to Iran & the Iranian culture, and those targets, and Iran itself, WILL BE HIT VERY FAST AND VERY HARD. The USA wants no more threats!" are not words that a chief of state like the USA president should say. These words are a violent attack to any democratic country, and mainly express the will of USA President to use Terrorism against any possible competitor.

We should hope that the House of Representative will be able to limit the current path of action of Mr. trump, (https://eu.usatoday.com/story/news/politics/2020/01/05/iran-nancy-pelosi-says-house-vote-limit-trumps-war-powers/2821968001/  https://www.nytimes.com/2020/01/04/opinion/editorials/trump-iran-threats-Suleimani.html?action=click&module=Opinion&pgtype=Homepage)

But what is very concerning, is the silence coming from many other international actors, and very concerning the EU silence.
There is NO justification for the European Union to wait to reject and condemn the recent act of terrorism done by Mr. Trump. We European had kill each other for millennia, and we should know well that PEACE and respect is a value we cannot neglect.

Europe cannot accept in silence acts of violence of this magnitude for cowardice, if the same would had be done by Libya or Senegal, the whole EU would have raise in one voice condamny it. The fact this was done by USA is what is stopping all. But is time for EU and probably the whole United Nations to realize that USA, under this administration, is a rogue state and must be isolated and stopped.

USA is a great country, with great people. But it has lost its north, the way the Trump administration (and Bush(es) before) is leading the country, is against the whole world interest and good.

A recent article huffpost.com/highline/article/sanctions/ is a must read to have better understanding of what can/should be done.

There is something we can do, and use Internet, Facebook, Twitter, not only to show our dogs underpants , or the last shitty meal we had.

We can use to put pressure to our governaments to say NO to violence and act of terrorism like the recent one done by Mr Trump.

There is no excuse for a chief of state to push the world to the edge of another global war, no excuse!

We have 2025 guests and no members online