Percona live is over, and we finally get some feedback about our presentations.

Initially I had 3 presentations to give:

But when I saw we were having a lot of great submissions, I decided that it would be better for the conference and for Percona to drop 2 of them and leave some free slots for others.

That has always been my line of conduct, I do not think we should have speakers with multiple talks unless exceptions.  I know in the past I had been presenting multiple times, but that is why I am stating this now, more and more.

Anyhow, the remaining talk was Comparing High Available Solutions With Percona XtraDB Cluster and Percona Server With Group Replication. Which is a high level discussion about High Availability and the two main solutions Percona provides for it. 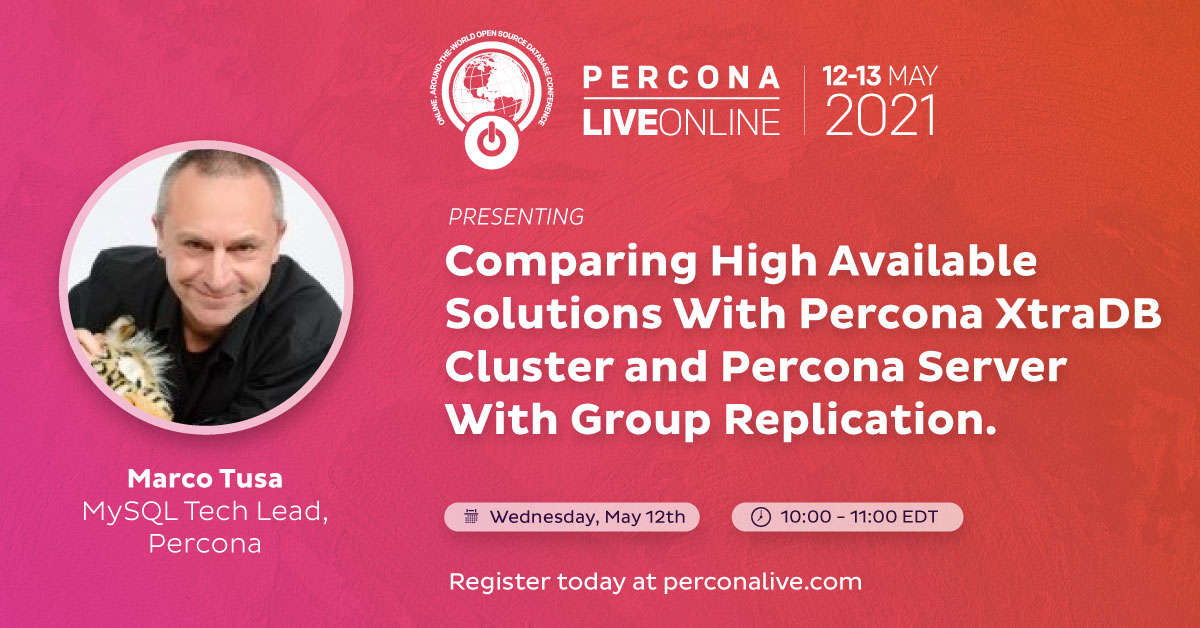 I thought we had a good level of interactions and discussion which is always a good sign, but when we finally got the feedback I discovered my session had 260 attendees.

Now, I am still trying to get more info (wondering why it is so difficult to get) but from what I discovered so far, it was in the first three most attended.

The reason to be for a speaker is to have not only people in the room, but people who interact because they are interested.
I like to think this is the result of years of honest and unbias blogging and speaking. So once more thank you!

Percona had not publish it yet on the official site, I am sharing it from youtube. In case you are still interested to view it, unfortunately the chat interaction is not there, given this was my original recording I had passed for the conference, but better than nothing right?

And now few comments about the conference.

In general it was a good conference, I think we had a decent mix of technical and less technical content. I really enjoyed the key notes with Amanda Brock and after Luis Villa. I can be more in alignment with one instead of the other, but the topic and the side discussion in the chat was great.

About trying to follow the tracks and trying to attend the most interesting speeches (for me), I have to say I was a bit disappointed.

In my article here I was giving an indication of which presentations I was going to attend or when in conflict I was expecting to be able to see the recording.

But there had been some unexpected inconveniences.

The first one, positive, was that I wanted to attend more talks than the ones in the list. The second one, negative, was that the conference organization did not provide the recording after the speech. Actually as mentioned above most of them are still not published.

Now, while I understand that in case of LIVE talk, you may need some time to put them up, I do not get why we were not publishing the recording, as they were, after the official slot was over. Any additional refining or editing could have been done later, but in the meantime people would have been able to get better service and attend more.

Point was that as soon as I discovered it was not possible to watch the recording after the presentation, I started to keep on at least two screens, and record what I cannot focus on to be able to watch it later. Very annoying and disappointing. But hey space for improvement right? Next online event can be better.

Another thing I liked was the platform used for the conference, easy, clean and allowed a lot of “offline” sharing. Yes, sometimes we had to reload the page to have the presentation running, but that was not a big deal.

I want to mention again the great work done by the Percona marketing team in making this event a great success. All of them, but special mention is for Bronwyn Campbell and Valentina Lago, without them Percona live 2021 would NOT be what it was.

Finally, while all of us around the globe HOPE to be able to attend the next conference in person, I strongly doubt this will be possible. We MUST keep in mind conferences as Percona Live is a global event. That will make it very unlikely to have people attending in person soon. Obviously the option is to limit it to a regional event, which for me will mean to diminish its relevance in a very impactful way. I miss meeting in person, but I would prefer to have the conference online, if that means I will miss a huge part of the speakers and their content!

And I may be pessimistic, but I doubt we will be in a safe position before the next event.

Well that is all for now, but stay tuned… because the two missed presentations are coming ;)

To all THANK YOU two hundred sixty thousand times once more.

We have 1918 guests and no members online